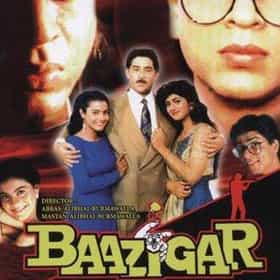 Baazigar is a 1993 Bollywood crime-thriller film directed by Abbas-Mustan, it is a contemporary thriller about a young man who stops at nothing to get what he wants. The story of Baazigar was inspired from the Hollywood film A Kiss Before Dying. Initially Salman Khan was the first choice to play the lead in the film. This was Shah Rukh Khan's breakthrough role as the sole lead, Kajol's first commercial success and Shilpa Shetty's debut film. Baazigar was the first film Shah Rukh Khan played the role of an anti-Hero and also the first film which earned Khan a Filmfare Award for Best Actor. It was a major commercial success at the time of its release and the first film of the famous ... more on Wikipedia

Baazigar is ranked on...

Baazigar is also found on...