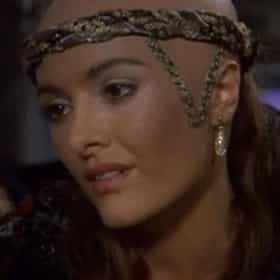 Babylon 5 is an American space opera television series created by writer and producer J. Michael Straczynski, under the Babylonian Productions label, in association with Straczynski's Synthetic Worlds Ltd. and Warner Bros. Domestic Television. After the successful airing of a backdoor pilot movie, Warner Bros. commissioned the series as part of the second-year schedule of programs provided by its Prime Time Entertainment Network. The pilot episode was broadcast on February 22, 1993 in the US. The first season premiered in the US on January 26, 1994, and the series ultimately ran for the intended five seasons. Describing it as having "always been conceived as, fundamentally, a ... more on Wikipedia

The Best Babylon 5 Episodes of All Time 575 votes List of the best Babylon 5 episodes, as determined by voters like you. With CGI effects that were way ahead of it's time, Ba...

#339 of 802 The Best TV Shows To Binge Watch 1.3M VOTES Bored? Not anymore! These are the best TV shows for binge-watching. The greatest television shows in the world are ranked he...
#9 of 313 People who voted for Babylon 5... also upvote Star Trek Franchise on The Best Alien Movies Ever Made also upvote Harry Potter Franchise on The Most Rewatchable Movies The Best Sci Fi Television Series of All Time 949.1k VOTES Here is a list of the best sci-fi shows and best sci-fi series of all time, as ranked by hundreds of Ranker voters. Thi...
#297 of 2,297 The Greatest TV Shows Of All Time 1.5M VOTES Choosing the best TV shows of all time means taking into account the best TV dramas, the best TV comedies, the best cartoons...
#167 of 391 TV Shows That Only Smart People Appreciate 1.3M VOTES Since about the early 2000s, TV audiences have been blessed with what many experts call The Golden Age of Television. In oth...
#18 of 62 The Best Science Fiction Franchises of All Time 35k VOTES Science fiction is a very popular genre in books, films, video games, and television shows. Some of the biggest grossing mov...
#102 of 281 People who voted for Babylon 5... People on the West Coast are 2x more likely to vote for this The Best Cult TV Shows of All Time 220.4k VOTES List of the best cult TV shows ever, ranked by their loyal fans. TV series that develop cult followings are known for their ...
#8 of 16 The Worst Bald Caps In Film And TV 10.1k VOTES Actors often have to make an effort to change their physical features in order to truly embody their characters. T...
#148 of 154 The All-Time Greatest TV Pilots 231k VOTES The greatest TV pilots of all-time are single episodes of television that introduced us to what would soon be iconic charact...
#81 of 85 TV Shows You Wish You Were a Character On 11.8k VOTES You don't just love your favorite TV series; you're obsessed with them. You don't just want to watch them over and over agai...
#640 of 686 The Greatest Shows of the 1990s, Ranked 264.5k VOTES In the 1990s, television was one of the fastest growing mediums. More TV shows were popping up than ever before, and ratings...
#174 of 273 The Greatest Supernatural Shows of All Time 460.1k VOTES The very best supernatural shows on television, ranked from best to worst. Popular supernatural TV shows have been a staple ...
#66 of 151 The Best Action-Adventure TV Shows 39.9k VOTES The very best action/adventure shows on television, ranked from best to worst. This list of the greatest in your face explos...
#14 of 77 The Most Exciting Sci-Fi Series Ever Made 3.2k VOTES The top sci-fi TV shows ever aired are some of the most exciting and thought-provoking to watch on television, but which is ...
#31 of 68 People who voted for Babylon 5... Men are 4x more likely to vote for this The Best Syfy TV Shows 41.4k VOTES Do you believe in aliens, ghosts, and the supernatural? Then the Syfy channel is for you! This list of the top current and c...
#20 of 99 The Greatest TV Shows Set in the Future 2.2k VOTES Blast forward in time and help rank the best TV shows set in the future. Since the early days of television, futuristic them...
#21 of 24 The Best 1990s Cult TV Series 2.4k VOTES These are the best 1990s cult TV series, ranked from best to worst by your votes. It's hard to put your finger on what made ...
#7 of 33 The Best Sci-Fi Shows of the 1990s 8k VOTES These are the best 1990s Sci Fi shows, ranked from best to worst by user votes. Some good 90s sci fi series are set centurie...
#21 of 68 The Best Alien TV Shows, Ranked 8.1k VOTES Whether you call them extraterrestrials or Martians, TV shows about aliens are always entertaining. The best TV shows about ...