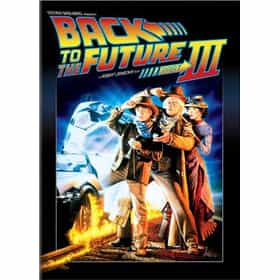 Back to the Future Part III is a 1990 American science fiction Western film. It is the third and final installment of the Back to the Future trilogy. The film was directed by Robert Zemeckis and starred Michael J. Fox, Christopher Lloyd, Mary Steenburgen, Thomas F. Wilson, and Lea Thompson. The film takes place immediately after the events of Back to the Future Part II. While stranded in 1955 during his time travel adventures, Marty McFly discovers that his friend Dr. Emmett "Doc" Brown, trapped in 1885, life was taken by Biff Tannen's great-grandfather Buford. Marty decides to travel to 1885 to rescue Doc. ... more on Wikipedia

Back to the Future Part III is ranked on...

#93 of 599 The Greatest Epic Movies Ever Made 286.3k VOTES Need some movie ideas? Check out this list of the best epic films of all time, which encompasses some of the best movie...
#114 of 410 The Best Rainy Day Movies 178k VOTES For many, rainy days are no fun—but it doesn't have to be that way. A great way to spend such days is watching movies, ...
#233 of 1,199 The Absolute Funniest Movies Of All Time 1M VOTES Looking for good comedy movies to watch? Here are the funniest movies of all time, ranked by fans. What are the top comedies...
#164 of 710 The Best Movies Roger Ebert Gave Four Stars 163.4k VOTES List of movies Roger Ebert gave four stars, ranked best to eh. This is NOT a complete list of all of Roger Ebert's four star...
#6 of 245 Critically Acclaimed Movies That Kinda Suck 109.9k VOTES List of supposedly great films that actually kind of suck. This list includes films that have won or been nominated for Osca...
#111 of 1,017 The All-Time Greatest Comedy Films 430.2k VOTES The best comedy movies of all time are listed here, in one convenient list to be voted on and ranked by true fans. Thes...
#34 of 56 The Best '90s Western Movies 29.6k VOTES Fans of western movies will know that the genre had fallen from prominence by the beginning of the 1990s. On this list of th...
#217 of 233 The Worst Sequels Of All Time 77.2k VOTES The worst movie sequels from throughout film history. These are the follow-up films in a franchise or reboots that brought t...
#112 of 318 The Best Movies for Kids 201.8k VOTES If you have kids, you know you are always on the lookout for a movie that they will love and that you can sit through withou...
#62 of 135 The Most Rewatchable Comedy Movies 18.2k VOTES Comedy films are some of the best comfort movies and often the ones we end up quoting the most. This is a list of comedy mov...
#94 of 165 Live Action Films with the Best CGI Effects 24.4k VOTES Live action films with the best CGI effects include some of the most popular movies of all-time. Think Jurassic Park, the Tr...
#11 of 107 The Best Third Films In A Movie Series 28.1k VOTES Threequel: the third (and often final) movie in a series. A third film that follows the original and the sequel. With the ne...
#4 of 46 The Best Time Travel Comedies, Ranked 5.1k VOTES What year is it? Or better yet, what time is it? It's time to decide on the best time travel comedy movies. These are the fu...
#60 of 569 The Greatest Sci-Fi Movies of All Time 563.7k VOTES What are the greatest sci-fi movies of all time? Science fiction films are among the most popular movies in cinematic h...
#84 of 294 The Best Teen Movies of All Time 684.9k VOTES Need a new movie to watch? Here's a list of the best teen movies and films about teenagers, adolescence, and high school. Wh...
#25 of 68 Good Movies for 11 Year Olds 15.2k VOTES This list has lots of awesome movies for 11 year olds, ranked from best to worst by user votes. The best movies for 11 year ...
#8 of 117 People who voted for Back to the Future Part III... Men are 3x more likely to vote for this The Best Time Travel Movies 49k VOTES If you're looking for the best time travel movies of all time, look no further. This list contains some great films about ti...
#23 of 60 The Greatest Guilty Pleasure '80s Movies 10.6k VOTES Indulge your love of big hair, terrible fashion, and neon colors with this collection of guilty pleasure 80s movies. Wh...
#7 of 195 The Best PG Science Fiction Movies 4.5k VOTES List of PG science fiction movies, ranked from best to worst with movie trailers when available. This list takes the best PG...
#43 of 68 The Best Steampunk Movies 17.1k VOTES A list of all the best steampunk movies ever made, many of which are streaming on Netflix and Amazon Prime. This steampunk m...
#27 of 58 The Best Teen Movies of the 1990s 38.7k VOTES The 1990s saw many classic, cult film hits that have remained popular even with modern audiences. What is the best 1990s tee...
Bad Movie Extras and Actors Who Almost Ruined Films 69k VIEWS Extras are cast in movies to add a level of realism. If two characters are having dinner at a restaurant, there needs to be ...
#1 of 66 The Best Mary Steenburgen Movies 1k VOTES List of the best Mary Steenburgen movies, ranked best to worst with movie trailers when available. Mary Steenburgen's highes...
#15 of 86 The Best Amblin Entertainment Movies 1k VOTES List of Amblin Entertainment movies, ranked best to worst, including trailers, genres, and release dates. Amblin Entertainme...
#15 of 96 The Best Christopher Lloyd Movies 1.7k VOTES List of the best Christopher Lloyd movies, ranked best to worst with movie trailers when available. Christopher Lloyd's high...
#13 of 80 The Best Sci-Fi Movies for 12 Year Old Kids 4.2k VOTES Science fiction movies can get really complicated and hard to follow. The top sci-fi films for 12 year olds don’t get too bo...

Back to the Future Part III is also found on...