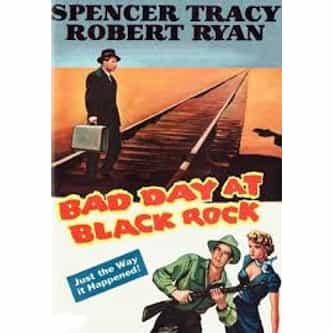 Bad Day at Black Rock is a 1955 thriller film directed by John Sturges and starring Spencer Tracy and Robert Ryan that combines elements of Westerns and film noir. The supporting cast includes Anne Francis, Dean Jagger, Walter Brennan, Lee Marvin and Ernest Borgnine. The picture tells the story of a mysterious stranger who arrives at a tiny isolated town in a desert of the southwest United States in search of a man. The film was adapted by Don McGuire and Millard Kaufman from the short ... more on Wikipedia

FANS OF Bad Day at Black Rock ALSO LIKE

Bad Day at Black Rock IS LISTED ON