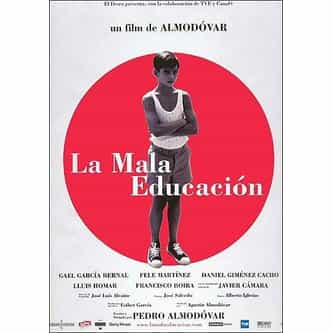 Bad Education is a 2004 Spanish drama film written and directed by Pedro Almodóvar. Starring Gael García Bernal, Fele Martínez, Daniel Giménez Cacho and Lluís Homar, the film focuses on two reunited childhood friends and lovers caught up in a stylised murder mystery. Along with metafiction, sexual abuse by Catholic priests, transsexuality and drug use are also important themes and devices in the plot, which led the MPAA to give the film an NC-17 rating. ... more on Wikipedia

Bad Education IS LISTED ON