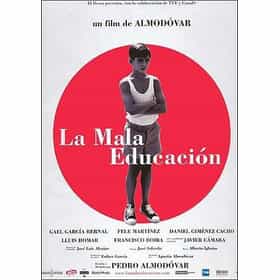 Bad Education is a 2004 Spanish drama film written and directed by Pedro Almodóvar. Starring Gael García Bernal, Fele Martínez, Daniel Giménez Cacho and Lluís Homar, the film focuses on two reunited childhood friends and lovers caught up in a stylised murder mystery. Along with metafiction, sexual abuse by Catholic priests, transsexuality and drug use are also important themes and devices in the plot, which led the MPAA to give the film an NC-17 rating. The film was released on 19 March 2004 in Spain and 10 September 2004 in Mexico. It was also screened at many international film festivals such as Cannes, New York, Moscow and Toronto before its US ... more on Wikipedia

Bad Education is ranked on...

#117 of 148 The Best Movies of 2004 10.9k VOTES A list of the best movies of 2004, from dramas like Crash to critically acclaimed films like Sideways. The '00s were a decad...
#175 of 391 The Best Gay Themed Movies 63.1k VOTES A list of all the best gay-themed movies ever made, many of which are streaming on Netflix and Amazon Prime. Find your favor...
#330 of 341 The Best Movies All Hipsters Love 104.7k VOTES Grab your mason jars, mustache comb, and ironic glasses, it’s time to rank the most hipster movies of all time! As any self-...
#17 of 47 40+ Powerful Movies About Pedophilia 2.8k VOTES A list of the best movies about the horrifying subject of pedophelia, ranked by movie fans with film trailers when available...

Bad Education is also found on...

Romance Movies and Films List of All Fantasy Movies Gay Movies: List of All Gay Films Movies Distributed by Sony Pictures Classics List of All Movies Released in 2004