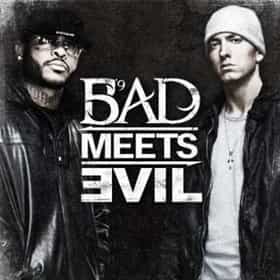 Bad Meets Evil is an American hip hop duo consisting of rappers Royce da 5'9" and Eminem. Bad Meets Evil was formed in 1997 thanks to the duo's mutual friend, Proof. It was formed after Royce featured on the song "Bad Meets Evil" for Eminem's major label debut The Slim Shady LP. Their discography consists of one extended play and four singles. In 1999, the duo released a double non-album single, "Nuttin' to Do" and "Scary Movies"; the former peaked at 36 on the Hot Rap Songs chart, while the latter peaked at 63 on the UK Singles Chart, and was featured on the soundtrack of the 2000 horror comedy parody film Scary Movie. The duo broke up after a feud ... more on Wikipedia

Bad Meets Evil is ranked on...

#376 of 1,038 The Worst Bands & Musicians of All Time 1.3M VOTES The worst bands in music history, ranked by music fans (and haters.) This list contains the most awful bands to listen to fr...
#34 of 203 The Best New School Rappers 517.5k VOTES Hip hop heads, who are the best new school rappers? Making the best and newest rap songs of 2018, these rising hiphop kings ...
#54 of 86 The Best Musical Duos 14.6k VOTES From the dawn of pop music, duos have been an important part of music history. Famous musical duos from the '50s and '60s ac...
#9 of 74 Rappers Who Put on the Greatest Live Shows, Ranked 30.4k VOTES Sounding good on stage is one thing, but putting on the greatest live show is another—and there's quite a few rappers w...
#50 of 125 The Best Horrorcore Artists of All Time 57.6k VOTES Here are the best horrorcore artists of all time ranked from best to worst by the Ranker community. This vo...
#27 of 66 The Best Alternative Hip Hop Groups/Artists 5.6k VOTES Alternative hip hop is one of the most underrated rap subgenres. While hip hop and rap music has captured the ears of m...
#6 of 73 The Best Midwestern Rappers 33.4k VOTES Midwest hip hop artists list, with photos, ranked best to worst by votes. List of good midwest rappers includes a filter so ...
#7 of 62 The Best Rap Duos Of All Time 6k VOTES Here are the greatest duos in hip hop history. Rap has a long and storied history. It was only a few decades ago when emcees...
#3 of 178 The Best Hardcore Rappers 35.2k VOTES Hardcore hip hop is a subgenre of rap music that developed at the beginning of the 1980s. The genre's lyrics tackled the har...