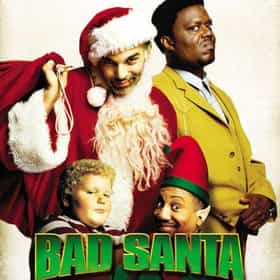 Bad Santa is a 2003 American Christmas black comedy film directed by Terry Zwigoff, and starring Billy Bob Thornton, Bernie Mac, and Lauren Graham, with Tony Cox, Brett Kelly, Lauren Tom, and John Ritter in supporting roles. The Coen brothers are credited as executive producers. The film was screened out of competition at the 2004 Cannes Film Festival. An unrated version was released on DVD on March 5, 2004 and on Blu-ray Disc on November 20, 2007 as Bad Santa. A director's cut DVD was released in November 2006; it features Zwigoff's cut of the film, which is three minutes shorter than the theatrical cut and ten ... more on Wikipedia

Bad Santa is ranked on...

Bad Santa is also found on...