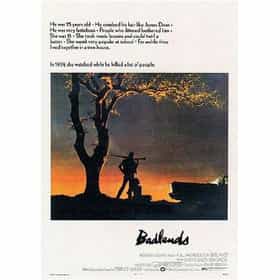 Badlands is a 1973 American film written and directed by Terrence Malick, starring Martin Sheen and Sissy Spacek. Warren Oates and Ramon Bieri are also featured. Malick has a small speaking part, although he does not receive an acting credit. The story, though fictional, is loosely based on the real-life spree of Charles Starkweather and his girlfriend, Caril Ann Fugate, in 1958, though such a basis was not acknowledged when the film was released. In 1993, five years after the United States National Film Registry was established, Badlands was selected for preservation by the Library of Congress as being "culturally, historically, or aesthetically significant". ... more on Wikipedia

Badlands is ranked on...

Badlands is also found on...