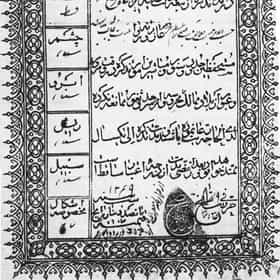 Bahá'u'lláh (; Persian : بهاءالله ; November 12, 1817 – May 29, 1892), born Mírzá Ḥusayn-`Alí Núrí (Persian: میرزا حسین‌علی نوری‎), was a Persian religious leader, and the founder of the Bahá'í Faith, which advocates universal peace and unity among all races, nations, and religions. At the age of 27, Bahá'u'lláh became a follower of the Báb, a Persian merchant who began preaching that God would soon send a new prophet similar to Jesus or Muhammad. The Báb and thousands of followers were executed by the Iranian authorities for their beliefs. Bahá'u'lláh faced exile from his native ... more on Wikipedia

Bahá'u'lláh is also found on...