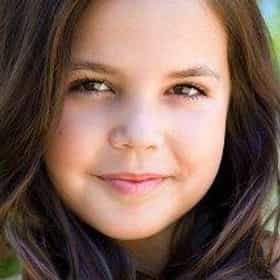 Bailee Madison (born October 15, 1999) is an American actress. She first gained acclaim for her role as May Belle Aarons in the fantasy drama film Bridge to Terabithia (2007). Madison received further recognition for her starring roles as Isabelle in the war drama film Brothers (2009), Sally Hurst in the horror film Don't Be Afraid of the Dark (2010), Maggie in the romantic comedy film Just Go with It (2011), Harper Simmons in the comedy film Parental Guidance (2012), Clementine in the fantasy film Northpole (2014), and Kinsey in the slasher horror film The Strangers: Prey at Night (2018). On television, she appeared as Maxine Russo in the fantasy sitcom Wizards of Waverly Place ... more on Wikipedia

Bailee Madison is ranked on...

#31 of 115 The Best Hallmark Channel Actors & Actresses Under 40 111.4k VOTES It can be difficult to build a notable career as a young celebrity, and even then there are a lot of ups and downs. If you c...
#52 of 163 The Best Hallmark Channel Actresses 190.5k VOTES They're the stars, the moms, the sisters, and the best friends. These Hallmark Channel actresses bring Hallmark Channel Orig...
#40 of 68 Celebrating The Best Young Actors Of The 2010s 1.3k VOTES Some of them may not be old enough to drink - or even drive - but the top young actors of the 2010s have managed to accompli...
#2 of 51 People who voted for Bailee Madison... also upvote Kelly Clarkson on The Best Current Female Singers also upvote The Muppets Franchise on The Best Disney Live-Action Movies The Next Generation Of Stars (Age 20 and Under) 197.7k VOTES Before we know it, all the great actors and actresses from this generation will all be old and receiving Lifetime Achievemen...
#84 of 102 Who Is The Most Famous Actress In The World Right Now? 91k VOTES When it comes to Hollywood, the most famous actresses can change like the seasons. With so many films and TV shows coming ou...
#24 of 53 The 50+ Best Young Actresses Under 25 4.1k VOTES Who are the young actresses that will take the places of stars like Miley Cyrus and Selena Gomez, who have since graduated f...
Hallmark Channel Actors and Actresses 144.2k VIEWS The Hallmark Channel may have a primary group of talent they work with but they also employ a wide range of actors you will ...
Famous Libra Female Celebrities 50.7k VIEWS While Libras' tendency to shift between interests quickly gives them a bad reputation for being fickle, the ability to ...
Celebrities Turning 21 In 2020 358 VIEWS Pop the bubbly! Joining the list of celebrities that are 21 in 2020 are actresses Joey King, Sabrina Carpenter, and Hun...

Bailee Madison is also found on...