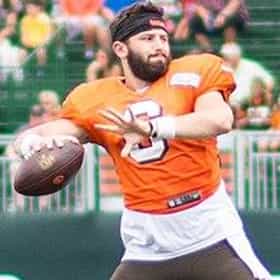 Baker Reagan Mayfield (born April 14, 1995) is an American football quarterback for the Cleveland Browns of the National Football League (NFL). Mayfield began his college football career as a walk-on player for the Texas Tech Red Raiders. He is notable for being the first walk-on true freshman quarterback to start a season opener at a BCS school. Mayfield transferred from Texas Tech to Oklahoma following supposed scholarship issues and a lack of communication with coaches. After sitting out the 2014 season due to NCAA transfer rules, Mayfield won the starting quarterback job in 2015. He won several awards for his performance as a senior in 2017, including the Heisman Trophy, Maxwell ... more on Wikipedia

Baker Mayfield is ranked on...

#38 of 53 The Best No. 1 Overall NFL Draft Picks Of All Time, Ranked 10.8k VOTES Every No. 1 overall pick in the NFL draft is a potentially franchise-changing player. Sometimes that player leads his team t...
#143 of 217 The Best Quarterbacks Of All Time 920k VOTES This list of the greatest quarterbacks of all time only includes the best NFL quarterbacks to ever play professional footbal...
#865 of 1,556 The Best Football Players Ever 1M VOTES One of the hot topics of debate not only among NFL fans but pundits as well is who is the best football player of all time. ...
#72 of 83 The Best Heisman Trophy Winners of All Time 31.3k VOTES A list of the best Heisman Trophy winners of all time. Since 1935, the Heisman Trophy has been handed out to the outstanding...
#54 of 90 The Most Overlooked Quarterbacks of All Time 33.2k VOTES A list of the most underrated quarterbacks of all time. Despite the gargantuan scouting staffs that NFL teams employ, there ...
#22 of 32 The Biggest Heisman Busts of All Time 9.4k VOTES The worst Heisman Trophy winners certainly excelled in the college game but failed at the next level. The biggest Hei...
#7 of 45 The Best College Football Quarterbacks of the 2010s 3.9k VOTES These are the best 2010s college quarterbacks, ranked by user votes. This list of the top 2010s college football quarterback...
#54 of 202 The All-Around Best Athletes of 2018 32.9k VOTES When it comes to being an all-around best athlete, you're not just talking about the leading scorers of all time, or th...
#4 of 28 The Best Sleepers Who Will Surprise Fantasy Owners In 2019 64 VOTES The fantasy football sleepers entering the 2019 NFL season could lead to huge success for your team if you select them in ju...
#11 of 17 Adorable Photos Of NFL Players With Tiny Dogs 105 VOTES The NFL is famous for its big men and their big personalities and big play on the field, but just because everything in the ...
#30 of 45 Who Will Win The 2019 NFL MVP Award? 3.3k VOTES Every 2019 NFL MVP award candidate is looking to leave his mark on the football world. And the top NFL MVP award candidates ...
#2 of 35 Who Will Win the 2018 NFL Rookie of the Year ? 38.3k VOTES UPDATE: Head over and make your 2019 NFL Rookie of the Year predictions. With every NFL season, you have plenty of new fac...