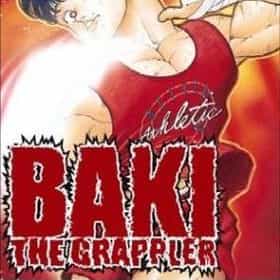 Baki the Grappler is ranked on...

#348 of 891 The Best Anime Series of All Time 5.7M VOTES You love anime but what tops this list of the best anime series ever made? Top anime series include shows like Death Note, A...
#71 of 88 The 30+ Best Shounen Anime Of All Time 567.2k VOTES Shounen (or "shōnen") is one of the most popular genres of anime. It is geared toward tee...
#179 of 190 The Best Action Anime of All Time 638.8k VOTES Action anime is hard to define, but if a show has car chases and epic battles, then it probably fits the genre's descri...
#12 of 57 The Best Martial Arts Anime of All Time 53.2k VOTES We're ranking the best martial arts anime of all time. Although martial arts usually refers to Asian practices of fighting, ...
#21 of 22 The Best Anime Like Ace of Diamond 774 VOTES Need some recommendations for anime like Ace of Diamond? Obvious choices include Cross Game and One Outs, but let's tak...
#54 of 66 Anime You Wish Was Streaming on Netflix 33.3k VOTES Although there are a lot of anime titles currently streaming on Netflix, there are so many titles that fans wish the service...
#8 of 14 The Best Boxing Anime of All Time 7.1k VOTES Get your gloves ready, because we're ranking all boxing anime from best to worst on the list below you. Of course everyone c...
#7 of 32 The Best Anime Like Kenichi: The Mightiest Disciple 1.3k VOTES Need some Kenichi: The Mightiest Disciple anime recommendations? Since it's such an influential series, let's rank...
#3 of 13 The 13 Best Anime Like Fist of the North Star 216 VOTES Fist of the North Star is a classic shonen martial arts anime from the 1980s. It follows Kenshiro, a powerful warrior w...