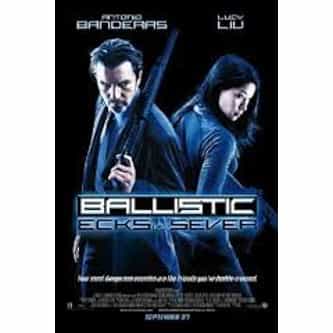 Ballistic: Ecks vs. Sever is a 2002 American action-thriller film starring Antonio Banderas and Lucy Liu, and directed by Wych Kaosayananda. Liu and Banderas play opposing secret agents who are supposedly enemies, but team up during the movie to fight a common enemy. The film was widely panned by critics, and is often listed among the worst movies ever made. The film was also a Box office bomb, recouping just over $19.9 million of its $70-million budget. ... more on Wikipedia

Ballistic: Ecks vs. Sever IS LISTED ON