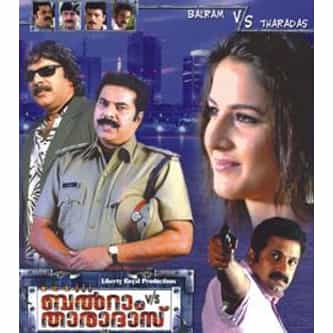 Balram vs. Tharadas is a 2006 Malayalam crime thriller directed by I.V. Sasi, written by T. Damodaran and S. N. Swamy, and starring Mammootty and Katrina Kaif. Mammootty plays double role in the film, both as the protagonist, Inspector Balram, as well as the antagonist, underworld don Tharadas. Mammootty reprises his roles from the 1991 blockbuster Inspector Balram and the 1984 blockbuster Athirathram. It was I. V. Sasi's 144th film, and a record 35th with Mammootty. The film was ... more on Wikipedia

Balram vs. Tharadas IS LISTED ON