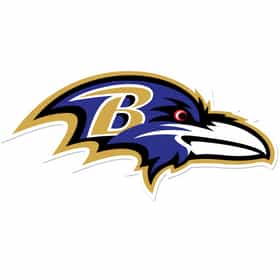 The Baltimore Ravens are a professional American football team based in Baltimore, Maryland. The Ravens compete in the National Football League (NFL) as a member club of the American Football Conference (AFC) North division. The team plays its home games at M&T Bank Stadium and is headquartered in Owings Mills.The Ravens were established in 1996, after Art Modell, who was then the owner of the Cleveland Browns, announced plans to relocate the franchise from Cleveland to Baltimore in 1995. As part of a settlement between the league and the city of Cleveland, Modell was required to leave the Browns' history and records in Cleveland for a replacement team and replacement personnel ... more on Wikipedia

Baltimore Ravens is ranked on...

#20 of 196 The Best Sport Team Names 33k VOTES These are the best sports team in organized team sports, as ranked by the wisdom of the crowd. Anyone can contribute to this...
#26 of 32 People who voted for Baltimore Ravens... also upvote Joe Flacco on The Best Quarterbacks in the NFL Right Now also upvote Ray Lewis on The Best Football Players Ever The Best Current NFL Helmets 96.8k VOTES It's not often that people who are big on sports take the time to admire the artwork that adorns the players of their favori...
#13 of 20 People who voted for Baltimore Ravens... also upvote Lord of the Rings Franchise on The Best Movies of All Time The Best Uniforms In The NFL 39.4k VOTES NFL fans love to argue over what team has the best uniform in the league. While to non-football fans this may seems like a...
#17 of 32 People who voted for Baltimore Ravens... People in the Northeast are 2x more likely to vote for this also upvote Harry Potter Franchise on The Most Rewatchable Movies The Greatest NFL Teams 135k VOTES The greatest NFL teams are those professional football teams beloved by fans and often hated by rivals. These teams are ofte...
#5 of 37 The Best Sports Teams Named After Animals 421 VOTES How many sports teams named after animals can you think of? Which animal sports teams do you think are the best of all ...
#16 of 32 Who Do You Think Will Win Super Bowl LIII? 57.9k VOTES With the 2018 NFL draft concluded, there's now plenty of time and reason to start projecting who will win Super Bowl LIII - ...
#10 of 32 Who Do You Think Will Win Super Bowl LII? 509 VOTES It's no secret America loves football and with the biggest game of the season getting closer each day, the internet is awash...
#7 of 32 The Top NFL Teams of 2012 2.1k VOTES What are the top NFL teams of 2012? That depends. This list considers several factors, including of course, the weekly power...
#1 of 32 Who Do You Think Will Win Super Bowl LIV? 9.3k VOTES UPDATE: The Kansas City Chiefs defeated the San Francisco 49ers to win Super Bowl LIV. It's time to start making 2020 Supe...

Baltimore Ravens is also found on...