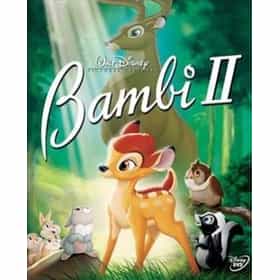 Bambi II, formally known as Bambi and The Great Prince of the Forest, is a 2006 American animated drama film directed by Brian Pimental and produced by DisneyToon Studios, that initially premiered in theaters in Argentina on January 26, 2006, before being released as a direct-to-video title in the United States on February 7, 2006. It holds the world record for the longest span of time between two consecutive installments of a franchise, being released 64 years after the original. The film takes place in the middle of Disney's original Bambi, with the Great Prince of the Forest dealing with the now motherless Bambi. It was first titled Bambi and the Great Prince, but was renamed Bambi ... more on Wikipedia

Bambi II is ranked on...

#89 of 110 The Best Disney Animated Movies of All Time 456.2k VOTES Since the 1930s, the Walt Disney Studios have been behind some of the best animated films of all time. This list contains fu...
#28 of 148 The Best Movies of 2006 10.5k VOTES A list of the best movies of 2006, from action movies like The Departed to comedies like Stranger Than Fiction. The '00s wer...
#15 of 26 26 Spin-Offs And Sequels To Hollywood Films You Probably Never Knew Existed 1.1k VOTES Casablanca. Gone with the Wind. Bambi. Classic works of cinematic art that tell a complete, self-contained story. But you ma...
#27 of 58 The Best Disney Movies Starring Animals 3.2k VOTES Walt Disney Studios has put out some great Disney movies with animals. This list will determine the best Disney animal movie...
#42 of 65 The Best Patrick Stewart Movies 1.5k VOTES List of the best Patrick Stewart movies, ranked best to worst with movie trailers when available. Patrick Stewart's highes...
#42 of 86 The Best G-Rated Family-Oriented Adventure Movies 1.1k VOTES List of G-Rated family-oriented adventure movies, ranked from best to worst with movie trailers when available. This list ta...

Bambi II is also found on...