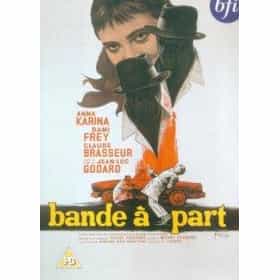 A beautiful young woman (the famous actress Anna Karina) meets two young men who convince her to help them rob her aunt.  A surreal version of a Hollywood gangster movie set in 1960's Paris, Bande å Part contains wonderful dance scenes, whimsical and tighter thematic and visual construction, and a pervasive, faintly romantic feeling that is unlike the rest of Godard's work. There is a great, memorable moment where, just before committing the crime, the trio take some time off to view some of the Louvre's art collection, at high speed.    A terrific, modern, melancoly movie. The film influenced on American director Quentin Tarantino who named his production company ... more on Wikipedia

Band of Outsiders is ranked on...

#83 of 139 The Greatest Movies in World Cinema History 6.5k VOTES Hollywood may be the epicenter of the movie business, but many of the best films released each year hail from all over the w...
#17 of 17 The Best Spontaneous Choreographed Dances in Film 1.6k VOTES Dance movies are fun, but do you know what is even more fun? Spontaneous dancing in movies that really have nothing to do wi...
#22 of 27 The Best '60s Dance Movies 223 VOTES Dance has long been an important element of any musical, whether you’re talking Broadway or Hollywood. The best '60s dance m...
#3 of 19 The Best Jean-Luc Godard Movies 359 VOTES List of the best Jean-Luc Godard movies, ranked best to worst with movie trailers when available. Jean-Luc Godard's highest ...

Band of Outsiders is also found on...