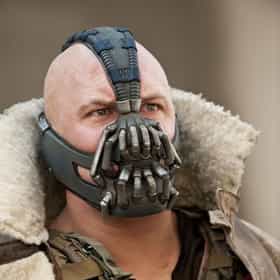 Bane is a supervillain, often antihero who appears in comic books published by DC Comics. The character's origin was in Batman: Vengeance of Bane #1, and was created by Chuck Dixon, Doug Moench, and Graham Nolan. Bane has been one of Batman's more physically and intellectually powerful foes. He is often credited for being the only villain to have "Broken The Bat". IGN's list of the Top 100 Comic Book Villains of All Time ranked Bane as #34. Bane was portrayed by Robert Swenson in the 1997 film Batman & Robin, and by Tom Hardy as the main antagonist in the 2012 film The Dark Knight Rises. ... more on Wikipedia

Forget The Joker - Why Bane Is Batman's True Arch Nemesis 385 votes When most people are asked to name Batman’s greatest enemy, they default to the Joker - but the rivalry between Bane and Bat...

Bane is ranked on...

#11 of 660 The Best Comic Book Villains 270.1k VOTES Who are the best comic book villains of all time? This list of top supervillains in comics includes some of the most notorio...
#20 of 961 People who voted for Bane... People under 30 are 2x more likely to vote for this also upvote Dark Knight Franchise on The Best Superhero Movies Ever Made The Greatest Movie Villains of All Time 1.2M VOTES While some of us tend to despise movie villains, plenty of movie-goers favor some of these antagonists. Whether that's ...
#6 of 176 The Greatest Villains in DC Comics, Ranked 88.9k VOTES Here are the best DC villains ranked best to worst by comic book fans. These popular bad guys in DC Comics are the best...
#3 of 88 The Best Batman Villains Ever 141.7k VOTES Batman has, arguably, the greatest rogues gallery in all of comics, so let's rank every Batman villain best to worst! Bad gu...
#74 of 102 Movie Tough Guys Without Super Powers or a Super Suit 36.6k VOTES In the age of the superhero movies, it's easy to forget sometimes that there are tough guys who don't need to hide behind su...
#14 of 15 15 Movie Villains You Could Outsmart 2.6k VOTES Imagine you're a scary cinematic supervillain intent upon destroying your adversaries and - likely - the entire wo...
#11 of 15 The Most Shockingly Violent Things Batman Villains Have Ever Done 14.4k VOTES A hero is only as good as his villains, and thankfully Batman has the absolute best selection of rogues of any DC hero....
#5 of 20 The Worst Comic Book Movie Super Villain Costumes 33.9k VOTES Super villains have all the fun, but in comic book movies, the villains also have the worst costumes. In almost any superher...
#3 of 15 15 Comic Book Villains With Horrifying And Heartbreaking Origin Stories 18.5k VOTES Comic villains are responsible for some of the most heinous acts in all of fiction. They commit the sorts of graphic cr...
#10 of 24 The 25 Hottest Batman Villains Ever 9.4k VOTES DC Comics has perfected the craft of creating intriguing female villains, arguably because their outlaws are often easy on t...
#14 of 20 The Villains Who Hurt Us The Most Over The 2010s 867 VOTES The 2010s might just have been the “Decade of the Villain.” That period of 10 years brought fans across multiple mediums and...
#6 of 16 Everyone (Other Than Bruce Wayne) Who Has Been Batman 4k VOTES While DC villains may wonder who's under the cowl, readers likely want to know who has been Batman in the comics. But answer...
#18 of 56 The Best Superheroes To Be For Halloween 1.7k VOTES Halloween is here, which means it's time to figure out your costume for the big night. Do you go as some current meme that...
#3 of 20 The Best Latinx Comic Book Characters 6.1k VOTES Latinx comic book characters are more prominent now than ever before! Not only are more Latin countries represented wit...
#15 of 22 The Most Iconic Masks in Movie History 6.7k VOTES Masks have been popular in all forms of entertainment since... there's been entertainment. They were one of the first, if no...
#12 of 15 Ranking Every Batman in the Comics 984 VOTES To the batcave! We’re ranking every Batman in the DC comics universe. Along with all Batman incarnations that appeared ...
Which Supervillain Would You Be, According To Your Zodiac Sign? 99.5k VIEWS Darkness can't exist without light, similarly to how good can't exist without evil. For every superhero, there needs to be a...
#6 of 42 The Best Tom Hardy Characters of All Time 3.6k VOTES Tom Hardy characters list, ranked from best to worst along with movie clips when available. These roles are ordered by the n...
What Your Favorite Batman Villain Says About You 856 VIEWS Batman’s rogues' gallery is unlike any other. His well of crazy, color-coordinating villains runs deep; there are ...