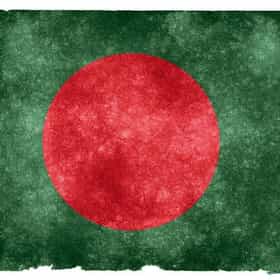 Bangladesh, officially the People's Republic of Bangladesh, is a country in South Asia; and is bordered by India to its west, north and east; Burma to its southeast and separated from Nepal and Bhutan by the Chicken’s Neck corridor. To its south, it faces the Bay of Bengal. Bangladesh is the world's eighth-most populous country, with over 160 million people, and among the most densely populated countries. It forms part of the ethno-linguistic region of Bengal, along with the neighbouring Indian states of West Bengal and Tripura. The present-day borders of Bangladesh took shape during the Partition of Bengal and British India in 1947, when the region came to be known as East Pakistan, ... more on Wikipedia

Bangladesh is ranked on...

Bangladesh is also found on...

the curse of robert, cities with most beautiful architecture, best of zoro, canada based airlines, 1 class airplane, list of hospital horror films, small towns in italy, how many prisons are in the us, seasons of the flash, hardest classical song