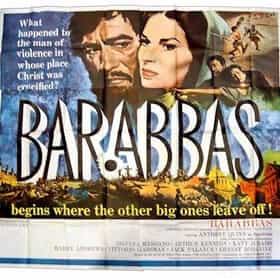 Barabbas is a 1961 religious epic film expanding on the career of Barabbas, from the Christian Passion narrative in the Gospel of Mark and other gospels. The film stars Anthony Quinn as Barabbas, features Silvana Mangano, Katy Jurado, Arthur Kennedy, Harry Andrews, Ernest Borgnine, Vittorio Gassman, and Jack Palance, and was distributed by Columbia Pictures. It was conceived as a grand Roman epic, was based on Nobel Prize-winning Pär Lagerkvist's 1950 novel of the same title. A previous film version of the novel, in Swedish, had been made in 1953. The film was directed by Richard Fleischer and shot in Verona and Rome under the supervision of producer Dino De Laurentiis. It ... more on Wikipedia

Barabbas is ranked on...

Barabbas is also found on...