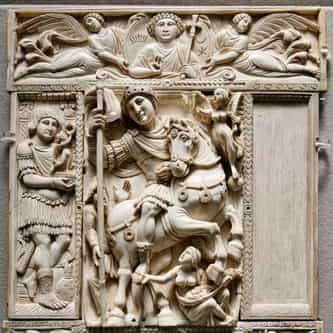 The Barberini ivory is a Byzantine ivory leaf from an imperial diptych dating from Late Antiquity, now in the Louvre in Paris. It represents the emperor as triumphant victor. It is generally dated from the first half of the 6th century and is attributed to an imperial workshop in Constantinople, while the emperor is usually identified as Justinian, or possibly Anastasius I or Zeno. It is a notable historical document because it is linked to queen Brunhilda of Austrasia. On the back there ... more on Wikipedia