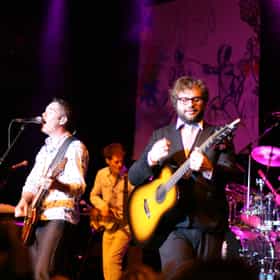 The Barenaked Ladies are a Canadian rock band, formed in 1988 in Scarborough, Ontario. The band quickly developed a cult following in Canada, with their self-titled 1991 cassette becoming the first independent release ever to be certified gold in Canada. Their debut with Reprise Records, Gordon, featuring the singles "If I Had $1000000" and "Brian Wilson", was released in 1992. Initially a duo of Ed Robertson and Steven Page, as of 2018 the band is composed of Robertson, Jim Creeggan, Kevin Hearn, and Tyler Stewart. Jim's brother Andy was a member between 1989 and 1995. Page left in 2009, reducing the group to a quartet. The band's style has evolved greatly ... more on Wikipedia

Barenaked Ladies is ranked on...

#181 of 620 The Greatest Live Bands of All Time 333.3k VOTES List of the greatest live bands or artists of all time, created and ranked by music fans worldwide asks the question "w...
#34 of 98 '90s Greats Making the Best Music Today 34.5k VOTES A list of 90s greats making the best music today. While many of their contemporaries have either fallen to the wayside or sp...
#10 of 12 Famous Bands That Originally Had Horrible Names 814 VOTES A name is everything whether you're a major company, a new product, or even a band. With just a word or a short phrase, a na...
#133 of 173 Celebrities You're Sick Of In 2018 64k VOTES Given it was quite the year for scandal and controversy, it's no surprise there are so many celebs the public is tired ...
#43 of 75 The Best Musical Guests on 'The Late Show with Stephen Colbert' in 2019 1k VOTES Update - Check out the musical guests on Colbert in 2020! This list contains videos and information about the 2019 musical...
#38 of 80 The Best Acoustic Bands and Artists of All Time 6k VOTES The backbone of music, regardless of your tastes, has always been acoustic music. Using only acoustic instruments (thus, no ...
#202 of 539 The Greatest Pop Groups & Artists of All Time 593.6k VOTES Update: Follow Ranker's official New Pop 2020 playlist on Spotify! For years, pop music has dominated your radio...
#26 of 43 The Best Acoustic Rock Bands/Artists 3.4k VOTES The foundation of rock music, debatably, is acoustic music. When many singer-songwriters sit down to work on a song or an id...
#65 of 204 The Best Power Pop Bands/Artists 15k VOTES The genre known as power pop is a derivative of 1960s rock pop that ruled the airwaves. The best power pop bands have catchy...
Every Band & Musician Who Has Performed on Saturday Night Live 109.8k VIEWS Live from the main stage at 30 Rockefeller Plaza, this is a list of every band, musician, and singer who has performed on Sa...
#146 of 165 The Best Musicians Who Performed on SNL In The '90s 862 VOTES The 1990s were a period of transition and change for Saturday Night Live, but they carried through and started the new mille...

Barenaked Ladies is also found on...