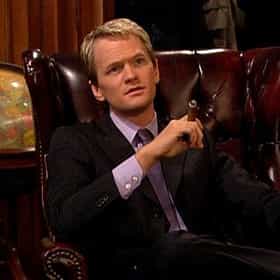 Barnabus "Barney" Stinson is a fictional character created by Carter Bays and Craig Thomas for the CBS television series How I Met Your Mother, portrayed by Neil Patrick Harris. One of the main characters of the show, Barney is a pickup artist who uses a variety of intricate ploys to have sex with as many women as possible, which is one of the show's central themes. The character is also defined by his love of expensive suits, laser tag, and the catchphrase "Suit up!" In later seasons, however, he has a few serious relationships before getting married, and after his divorce he has a child with an unnamed woman from a one night stand. The character has been ... more on Wikipedia

Barney Stinson is ranked on...