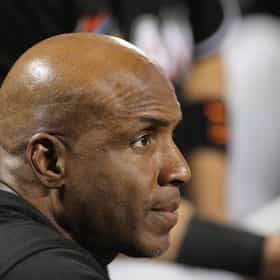 Barry Lamar Bonds (born July 24, 1964) is an American former professional baseball left fielder who played 22 seasons in Major League Baseball (MLB) with the Pittsburgh Pirates and San Francisco Giants. He received a record seven NL MVP awards, eight Gold Glove awards, a record 12 Silver Slugger awards, and 14 All-Star selections. He is considered to be one of the greatest baseball players of all time.Bonds was regarded as an exceptional hitter: he led MLB in on-base plus slugging six times, and placed within the top five hitters in 12 of his 17 qualifying seasons. He holds many MLB hitting records, including most career home runs (762), most home runs in a single season (73, set in ... more on Wikipedia

Barry Bonds is ranked on...

Barry Bonds is also found on...