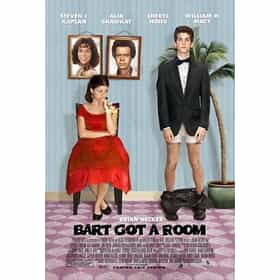 Bart Got a Room

Bart Got a Room is a 2008 comedy film written and directed by Brian Hecker, and stars Steven Kaplan, Alia Shawkat, William H. Macy, and Cheryl Hines. Also appearing in the film are Ashley Benson, Brandon Hardesty, Kate Micucci, Jennifer Tilly, Dinah Manoff and Chad Jamian Williams as Bart. The film premiered at the Tribeca Film Festival on April 25, 2008. It had a limited US release in select theaters on April 3, 2009 and was released on DVD on July 28, 2009. ... more on Wikipedia

Bart Got a Room is ranked on...

Bart Got a Room is also found on...