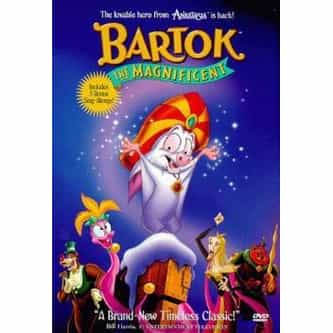 Bartok the Magnificent, directed by Don Bluth and Gary Goldman, is a 1999 direct-to-video spin-off to the 1997 film Anastasia, which features Hank Azaria as the voice of Bartok, Kelsey Grammer as the voice of Zozi, and Jennifer Tilly as Piloff. It is a "family adventure...animated comedy" film, according to Fort Oglethorpe Press. Although the film was released after Anastasia, it is unclear if the events in the film take place before or after those of its predecessor. While many ... more on Wikipedia

Bartok the Magnificent IS LISTED ON