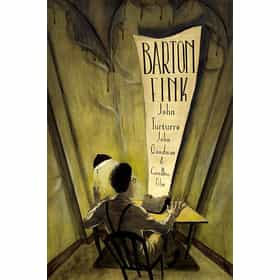 Barton Fink is a 1991 American period film written, produced, directed and edited by the Coen brothers. Set in 1941, it stars John Turturro in the title role as a young New York City playwright who is hired to write scripts for a film studio in Hollywood, and John Goodman as Charlie, the insurance salesman who lives next door at the run-down Hotel Earle. The Coens wrote the screenplay in three weeks while experiencing difficulty during the writing of Miller's Crossing. Soon after Miller's Crossing was finished, the Coens began filming Barton Fink, which had its premiere at the Cannes Film Festival in May 1991. In a rare sweep, Barton Fink won the Palme d'Or, as well as awards for Best ... more on Wikipedia

The Most Memorable Quotes From 'Barton Fink' 58 votes The best Barton Fink quotes make you realize how great the movie really is, even if you haven't seen it in a while. It was t...

Barton Fink is ranked on...

Barton Fink is also found on...