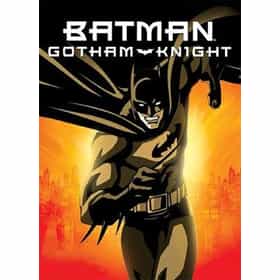 Batman: Gotham Knight is a 2008 direct-to-DVD anthology film of six short animated superhero films intended to be set in between the films Batman Begins and The Dark Knight, though it is not canon with the series. It depicts Batman battling against the mob of Gotham City, as well as other villains. The producers have acknowledged that it is not necessarily meant to be canon to the "Nolanverse," and any of the six segments could easily fall into almost any Batman continuity. The shorts, or segments, are written by Josh Olson, David S. Goyer, Brian Azzarello, Greg Rucka, Jordan Goldberg and Alan Burnett. Although all based on Japanese anime art style, each segment has its own ... more on Wikipedia

Batman: Gotham Knight is ranked on...