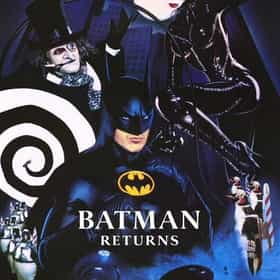 Batman Returns is a 1992 American superhero film, directed and produced by Tim Burton, based upon the Batman character appearing in comics published by DC Comics. It is the second installment of Warner Bros.' initial Batman film series, with Michael Keaton reprising the title role of Bruce Wayne/Batman. The film introduces the characters of Max Shreck, a business tycoon who teams up with the Penguin to take over Gotham City, as well as the character of Catwoman. Burton originally did not want to direct another Batman film because of his mixed emotions toward the previous film in 1989. Warner Bros. developed a script with writer Sam Hamm which had the Penguin and Catwoman going after ... more on Wikipedia

17 Ways Batman Returns Is Actually An Insanely Twisted Movie 11.5k views When it first debuted in 1992, Batman Returns was one of the most anticipated film sequels of all-time. That’s a good indica...
Catwoman In 'Batman Returns' Introduced Unabashed Sensuality To '90s Kids Around The World 7.8k views In 1992, Batman Returns set a precedent for the superhero films that followed in its wake. It’s thematically and visually da...

Batman Returns is ranked on...

Batman Returns is also found on...

best movie props, what is the tallest dinosaur, is matt damon in game night, facts of life cast, thriller horror movies, wizard of oz secrets, best screenwriters of all time, return of the jedi characters, messages from beyond, 80s kung fu movies