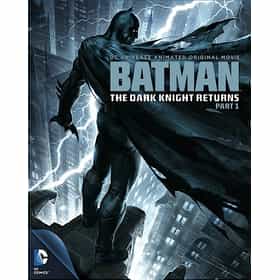 Batman: The Dark Knight Returns is a two-part direct-to-video animated superhero film, an adaptation of the 1986 comic book The Dark Knight Returns by Frank Miller and serves as a sequel to 2011's Batman: Year One. It was directed by Jay Oliva, who worked as a storyboard artist on Man of Steel, Batman: Year One and Batman: Under the Red Hood. Several other Batman veterans were also involved in the film. Part 1 was released September 25, 2012, and Part 2 was released January 29, 2013. A deluxe edition combining parts 1 and 2 was released on October 8, 2013. It is the 15th film in the DC Universe Animated Original Movies series. ... more on Wikipedia

Batman: The Dark Knight Returns, Part 1 is ranked on...

#71 of 183 The Best Superhero Movies Ever Made 515.3k VOTES Superhero movies may seem like a current trend, but the truth is, superheroes on film have been around since the beginning o...
#20 of 72 The Best TV Shows And Movies You Can Watch On DC's Streaming Platform 4.5k VOTES DC Universe launched in the early fall of 2018, offering new comic book shows based on DC titles alongside classic animated ...
#124 of 164 The Greatest Comic Book Movies of All Time 151.8k VOTES This list of the best comic book movies ever, is ranked by fans of both comics and movies and needs your votes as well! This...
#27 of 35 The Scariest Clown Movies in Film History 33.2k VOTES   Movies with the scariest clowns are designed to play on our irrational fear of the normally jolly, happy creatures....
#17 of 97 The Very Best DC Comics Movies 42k VOTES (If you're looking for the new films, check out the best DC Extended Universe movies here!) DC Comics is one of the two main...
#5 of 14 14 Cartoon Comic Book Movies That Are Better Than Live-Action Superhero Movies 16.1k VOTES The start of the 21st century marked the Golden Age of comic book movies. Never before were geeks more spoiled with not...
#14 of 73 The Best PG-13 Animation Movies 844 VOTES List of PG-13 animation movies, ranked from best to worst with movie trailers when available. This list takes the best PG-13...
#19 of 25 The Best Animation Movies of 2012 449 VOTES List of the best 2012 animation movies, ranked by how many upvotes they've received by other fans of the genre. Animated mov...

Batman: The Dark Knight Returns, Part 1 is also found on...