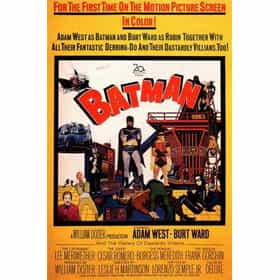 Batman, often promoted as Batman: The Movie, is a 1966 film based on the Batman television series, and the first full-length theatrical adaptation of the DC Comics character Batman. Released by 20th Century Fox, the film starred Adam West as Batman and Burt Ward as Robin. Released in July, the film hit theaters over a month after the last episode of the first season of the television series. The film includes most members of the original TV cast, with the exception of Lee Meriwether as Catwoman, the character previously played at this point by Julie Newmar in two episodes of the series' first season. ... more on Wikipedia

Batman is ranked on...

#344 of 626 The Greatest Guilty Pleasure Movies 201.9k VOTES   What makes a film a guilty pleasure? This is a movie that you love to watch, but won't display on your DVD shelf......
#135 of 164 The Greatest Comic Book Movies of All Time 151.8k VOTES This list of the best comic book movies ever, is ranked by fans of both comics and movies and needs your votes as well! This...
#34 of 97 The Very Best DC Comics Movies 42k VOTES (If you're looking for the new films, check out the best DC Extended Universe movies here!) DC Comics is one of the two main...
#25 of 47 Every Version of Batman You Can Watch, Ranked 5.1k VOTES Batman is arguably the most recognizable superhero on the planet. There's iconic, there's legendary, and then there's Batman...
#1 of 10 The Best '60s Superhero Movies 154 VOTES These are the best 1960s superhero movies, ranked by user votes. The best 60s superhero movies are cult classics that remain...
#323 of 462 The Best Feel-Good Movies 433k VOTES Want to feel warm and fuzzy inside? This is a ranked list of the best feel-good movies that make us experience all the good ...
#19 of 116 The Best Movies of 1966 2.3k VOTES List of the best movies of 1966, with movie trailers when available. Many remember 1966 as the year that Walt Disney died ...
#6 of 38 The Best Campy Comedy Movies, Ranked 1.4k VOTES This list contains information on the best campy comedy movies, ranked from best to worst by user votes. The best campy come...
#21 of 233 The Best PG Action/Adventure Movies 3.5k VOTES List of PG action/adventure movies, ranked from best to worst with movie trailers when available. This list takes the best P...

Batman is also found on...