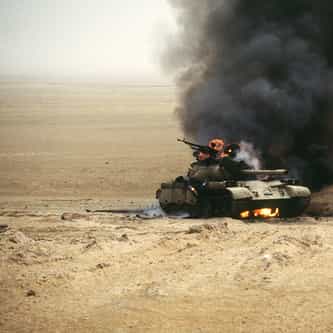 The Battle of 73 Easting was a decisive tank battle fought on 26 February 1991, during the Gulf War, between United States armored forces of the 7th Corps and those of the Iraqi Republican Guard and its Tawakalna Division. The battle took place several hours after the Battle of Al Busayyah. On February 26-27th 1991. It was named for a UTM north-south coordinate line in the featureless desert that was used as a phase line to measure progress of the offensive. The battle was described by the ... more on Wikipedia