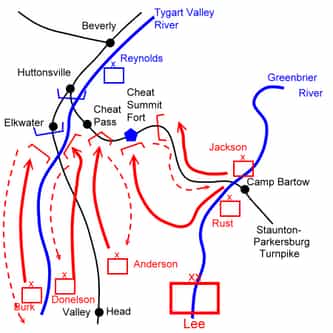 The Battle of Cheat Mountain, also known as the Battle of Cheat Summit Fort, took place from September 12 to 15, 1861, in Pocahontas County and Randolph County, Virginia as part of the Western Virginia Campaign during the American Civil War. It was the first battle of the Civil War in which Robert E. Lee led troops into combat. During the battle, Lee attempted to surround the Union garrison atop Cheat Mountain, but the attack was never launched, due to false information from prisoners and ... more on Wikipedia