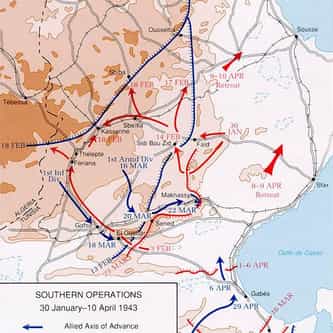 The Battle of El Guettar was a World War II battle that took place during the Tunisia Campaign, fought between elements of the Army Group Africa under General Hans-Jürgen von Arnim, along with Italian forces under General Giovanni Messe, and U.S. II Corps under Lieutenant General George S. Patton in south-central Tunisia. It was the first battle in which U.S. forces were able to defeat the experienced German tank units, but the followup to the battle was inconclusive. ... more on Wikipedia