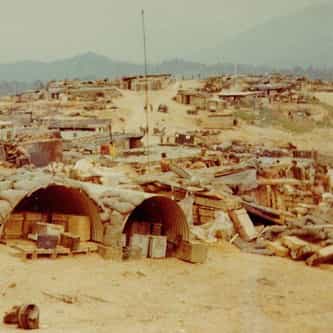 The Battle of FSB Mary Ann occurred when Viet Cong sappers attacked the U.S. firebase located in Quảng Tín Province, South Vietnam early on the morning of 28 March 1971. Fire support base Mary Ann was located to interdict movement of enemy troops and materiel down the K-7 Corridor and Dak Rose Trail. Originally intended to be a temporary base, it evolved into a more permanent location garrisoned by at least one company of U.S. ground forces. The base was manned by 231 American ... more on Wikipedia