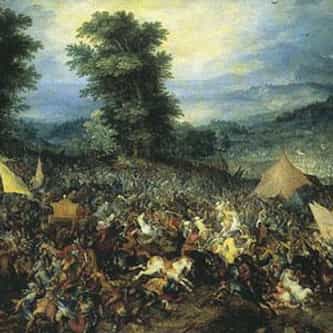 The Battle of Gaugamela, also called the Battle of Arbela, was the decisive battle of Alexander the Great's invasion of the Persian Achaemenid Empire. In 331 BC Alexander's army of the Hellenic League met the Persian army of Darius III near Gaugamela, close to the modern city of Mosul in Iraq. Even though heavily outnumbered, Alexander emerged victorious due to his superior tactics and army. It was a decisive victory for the Hellenic League and led to the fall of the Achaemenid Empire. ... more on Wikipedia

Battle of Gaugamela IS LISTED ON

superman villains list, greatest leaders of all time, alcoholic us presidents, list of actors, house of lords members, top 10 politicians in tamilnadu, bands like cage the elephant, who is the mayor of san francisco, important leaders of mexico, examples of world leaders