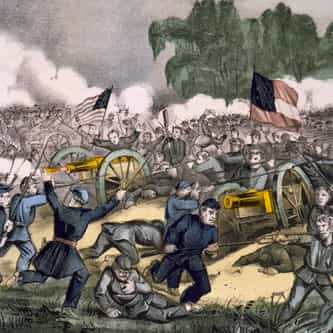 The Battle of Gettysburg was fought July 1–3, 1863, in and around the town of Gettysburg, Pennsylvania, by Union and Confederate forces during the American Civil War. The battle involved the largest number of casualties of the entire war and is often described as the war's turning point. Union Maj. Gen. George Meade's Army of the Potomac defeated attacks by Confederate Gen. Robert E. Lee's Army of Northern Virginia, ending Lee's attempt to invade the North. After his success at ... more on Wikipedia

lists about Battle of Gettysburg

1.7k votes Why Did The South Lose Gettysburg, The Most Decisive Battle Of The Civil War?

15.6k readers Is Gettysburg Haunted To This Day? There's Compelling Evidence That It Is

Battle of Gettysburg IS LISTED ON

#3 of 67
37.6k VOTES The Most Important Battles in US History
#1 of 30
761 VOTES Modern Photos Of The Deadliest Battles In History
15.1k VIEWS The 14 Bloodiest Battles Ever Fought On American Soil
List Of American Civil War Battles The Battles of Robert E. Lee