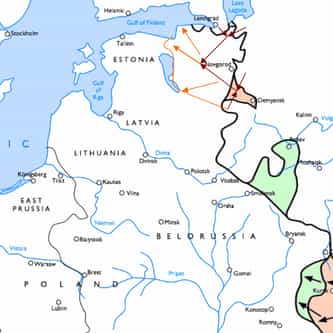 The Battle of Krasny Bor was part of the Soviet offensive Operation Polyarnaya Zvezda. It called for a pincer attack near Leningrad, to build on the success of Operation Iskra and completely lift the Siege of Leningrad, encircling a substantial part of the German 18th Army. The offensive near Krasny Bor, formed the western arm of the pincer. The Soviet offensive began on Wednesday, 10 February 1943. It produced noticeable gains on the first day, but rapidly turned into a stalemate. The ... more on Wikipedia