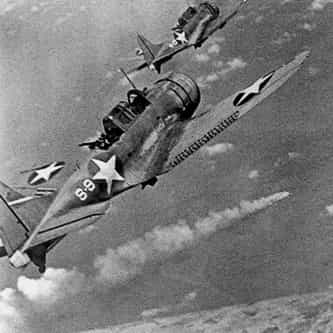 The Battle of Midway was a crucial and decisive naval battle in the Pacific Theatre of World War II. Between 4 and 7 June 1942, only six months after Japan's attack on Pearl Harbor and one month after the Battle of the Coral Sea, the United States Navy under Admirals Chester Nimitz, Frank Jack Fletcher, and Raymond A. Spruance decisively defeated an attacking fleet of the Imperial Japanese Navy under Admirals Isoroku Yamamoto, Chuichi Nagumo, and Nobutake Kondo on Midway Atoll, inflicting ... more on Wikipedia

Battle of Midway IS LISTED ON

#2 of 67
37.6k VOTES The Most Important Battles in US History
488.2k VIEWS The Worst Defeats in Military History
World War II Battles Involving the United States Of America List Of Pacific War Battles The Battles of Raymond A. Spruance