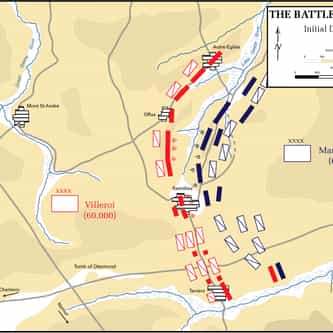 The Battle of Ramillies, fought on 23 May 1706, was a major engagement of the War of the Spanish Succession. For the Grand Alliance – Austria, England, and the Dutch Republic – the battle had followed an indecisive campaign against the Bourbon armies of King Louis XIV of France in 1705. Although the Allies had captured Barcelona that year, they had been forced to abandon their campaign on the Moselle, had stalled in the Spanish Netherlands, and suffered defeat in northern Italy. Yet ... more on Wikipedia

List Of War of the Spanish Succession Battles The Battles of John Churchill, 1st Duke of Marlborough