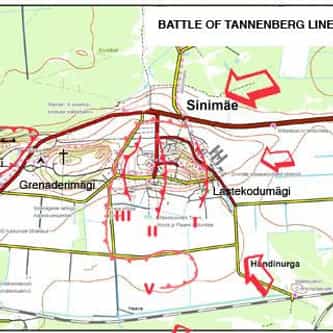 The Battle of Tannenberg Line was a military engagement between the German Army Detachment "Narwa" and the Soviet Leningrad Front. They fought for the strategically important Narva Isthmus from 25 July to 10 August 1944. The battle was fought on the Eastern Front during World War II. The strategic aim of the Soviet Estonian Operation was to reoccupy Estonia as a favourable base for the invasions of Finland and East Prussia. Several Western scholars refer to it as the Battle of ... more on Wikipedia