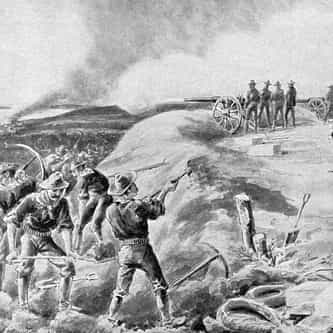 The Battle of the Aguadores was a sharp skirmish on the banks of the Aguadores River near Santiago de Cuba, on 1 July 1898, at the height of the Spanish-American War. The American attack was intended as a feint to draw Spanish defenders away from their nearby positions at San Juan Hill and El Caney, where the main blows fell later that day. Poor coordination between Duffield's column and the North Atlantic Fleet led to an ineffective bombardment of the Spanish positions. By the time the ... more on Wikipedia