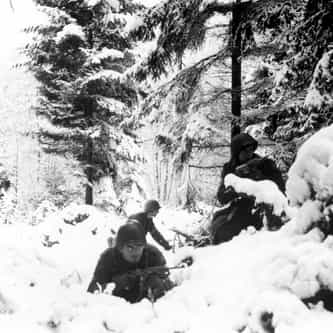 The Battle of the Bulge was a major German offensive campaign launched through the densely forested Ardennes region of Wallonia in Belgium, France, and Luxembourg on the Western Front toward the end of World War II in Europe. Eric von Manstein planned the offensive with the primary goal to recapture the important harbor of Antwerp. The surprise attack caught the Allied forces completely off guard. United States forces bore the brunt of the attack and incurred their highest casualties for ... more on Wikipedia

Battle of the Bulge IS LISTED ON