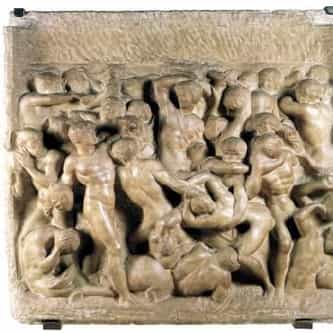 Battle of the Centaurs

Battle of the Centaurs is a relief by Italian Renaissance artist Michelangelo, created around 1492. It was the last work Michelangelo created while under the patronage of Lorenzo de' Medici, who died shortly after its completion. Inspired by a classical relief created by Bertoldo di Giovanni, the unfinished marble sculpture depicts the mythic battle between the Lapiths and the Centaurs. A popular subject of art in ancient Greece, the story was suggested to Michelangelo by the classical ... more on Wikipedia