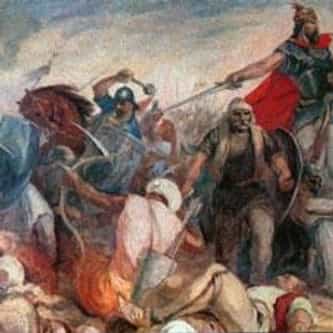 The Battle of Albulena, also known as the Battle of Ujëbardha, was fought on 2 September 1457 between Albanian forces led by Skanderbeg and an Ottoman army under Isak bey Evrenoz and Skanderbeg's nephew, Hamza Kastrioti. Skanderbeg had been the leader of the Albanians for over a decade and had seen many victories over Ottoman arms. However, after his loss at Berat in 1455 at the hands of Isak bey, Skanderbeg was betrayed by some of his most trusted officers, among them Moisi Arianit ... more on Wikipedia