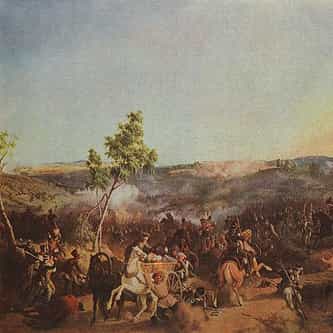 The Battle of Valutino took place on 18 August 1812, between Marshal Ney's corps, about 30,000 strong, and a strong rear-guard of General Barclay de Tolly's army of about 40,000, commanded by the General himself. The Russians were strongly posted in marshy ground, protected by a small stream, about 20 Kilometers east of Smolensk. The French, attacking resolutely, carried the Russian position in the face of enormous natural difficulties. ... more on Wikipedia