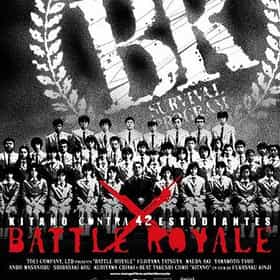 Battle Royale is a 2000 Japanese action thriller film adapted from the 1999 novel of the same name by Koushun Takami. It is the final film directed by Kinji Fukasaku, the screenplay written by his son Kenta, and stars Takeshi Kitano. The film tells the story of Shuya Nanahara, a junior high-school student who is struggling with the end of his father's life and is forced by the government to compete in a game where the students must take each other's lives in order to win. The film aroused both domestic and international controversy and was either banned outright or deliberately excluded from distribution in several countries. ... more on Wikipedia

Battle Royale is ranked on...

Battle Royale is also found on...