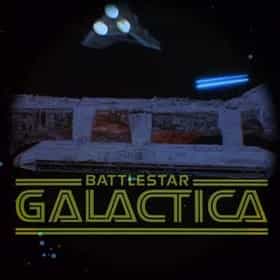 Battlestar Galactica is an American science fiction television series, created by Glen A. Larson, that began the Battlestar Galactica franchise. Starring Lorne Greene, Richard Hatch and Dirk Benedict, it ran for one season in 1978–79. After cancellation, its story was continued in 1980 as Galactica 1980 with Adama, Lieutenant Boomer and Boxey being the only continuing characters. Books have been written continuing the stories. The series was remade in 2003, beginning with a three-hour mini-series followed by a weekly series which ran from 2004–2009. A feature film remake is also planned, to be directed by Bryan Singer with production input from original series creator Glen A. Larson. ... more on Wikipedia

Battlestar Galactica is ranked on...

#19 of 313 People who voted for Battlestar Galactica... also upvote Star Wars Franchise on The Best Space Movies also upvote Star Wars Franchise on The Most Rewatchable Movies The Best Sci Fi Television Series of All Time 949.1k VOTES Here is a list of the best sci-fi shows and best sci-fi series of all time, as ranked by hundreds of Ranker voters. Thi...
#10 of 280 The Best Shows Canceled After a Single Season 122.8k VOTES What are the best single season canceled shows in television history? These shows were actually really great, but for whatev...
#289 of 590 The Best TV Theme Songs of All Time 323.7k VOTES The best TV theme songs and TV intros of all time will take you back to some of the greatest moments in TV. Television theme...
#51 of 85 TV Shows You Wish You Were a Character On 11.8k VOTES You don't just love your favorite TV series; you're obsessed with them. You don't just want to watch them over and over agai...
#39 of 50 What to Watch If You Love 'The X-Files' 130 VOTES The X-Files kept viewers on the edge of their seats with alien investigations and the paranormal, so it's no surprise that y...
#39 of 70 The Best Sci-Fi Thriller Series Ever Made 3k VOTES The best science fiction thriller shows are a perfect storm of futuristic imagination and out-of-this-world tension. The bes...
#33 of 47 The Best TV Drama Shows of the 1970s 3.5k VOTES List of the best dramas on television in the 70s, as ranked by television critics and fans. The 1970s was not just about Far...
#5 of 65 The Best Sci-Fi Action Series Ever 2.1k VOTES The best science fiction action shows are a perfect storm of futuristic imagination and out-of-this-world excitement. The be...
#15 of 52 The Greatest Dystopian TV Shows 5.1k VOTES Across all types of sci-fi, the one type that seems to permeate the genre the most is dystopian fiction. The concept of a fu...
#9 of 41 The Best 1970s Action TV Series 749 VOTES These are the best 1970s Action TV series, ranked from best to worst by user votes. The legendary, great 70s action shows we...
#6 of 25 The Best Military Science Fiction TV Shows 5.4k VOTES The very best military science fiction shows on television, ranked from best to worst. This list of the greatest military sc...
#21 of 37 The Best 1970s ABC Shows 2.2k VOTES This list of 1970s ABC shows might surprise you with how many of your favorite shows of the '70s were on just one network. T...

Battlestar Galactica is also found on...