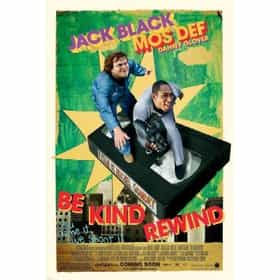 Be Kind Rewind is a 2008 comedy-drama film from New Line Cinema, written and directed by Michel Gondry and starring Jack Black, Mos Def, Melonie Diaz, Danny Glover and Mia Farrow. The film first appeared on January 20, 2008 at the 2008 Sundance Film Festival. It was later shown at the Berlin International Film Festival. The film opened on February 22, 2008 in the United Kingdom and in North America. The title is inspired by a phrase that was commonly displayed on VHS rental tapes during the medium's heyday. ... more on Wikipedia

Be Kind Rewind is ranked on...

Be Kind Rewind is also found on...